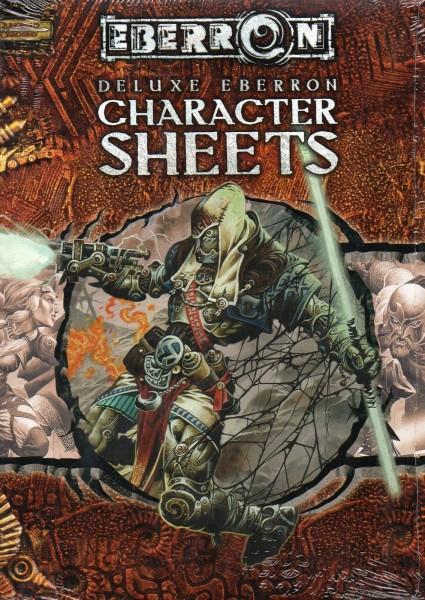 Inside the pockets of this protective folder, you'll find a full set of DUNGEONS & DRAGONS character sheets
for use in any EBERRON or other D&D campaign.

Each character sheet features an attractive folio-style layout, giving you plenty of room to keep track of
everything that makes your characters unique.

- Four-page adventure log sheets, which you can use to keep track of encounters, NPCs, and campaign details.
- Spell lists for all the spellcasting classes in the Player's Handbook, Complete Adventurer, Complete Arcane,
and Complete Divine,
plus spell lists for the assassin and blackguard prestige classes described in the Dungeon Master's Guide.

- A list of infusions for the artificer class described in the EBERRON Campaign Setting.

Every character sheet, adventure log, and spell list is easy to photocopy,
so you'll always have a fresh sheet on hand when you need one.